One is Mature Mango, which is made of mango fruit from Miyazaki prefecture. JPY 17,000.

The other is Honey Glow Pineapple; the pineapples are selected by Daiwa Supermarket, which is famous for its fruit sandwich (which is not vegan, unfortunately).

The shop is in Koto, Tokyo and its website is below.

If you are a vegan and are going to stay in a Western style hotel in Japan, you won’t have much problem. Many of these hotels serve buffet breakfast and you can eat what you can eat.

On the other hand, ryokans – traditional Japanese hotels – serve dinner as well as breakfast. You can ask them not to serve dinner for you, of course, but most ryokans serve traditional and regional dishes, which are often fantastic, and it’s shame if you cannot enjoy them. Some ryokans can serve vegan dishes and I strongly recommend you try asking if they could prepare something for you.

Ryokans are pretty popular among Japanese for their kind and sophisticated services. There you will be able to experience some other traditional features of Japan, such as sleeping on futon (mattress) used directly on tatami (flooring material made of straw), as many Japanese people have traditionally been doing.

In short, you will feel you are really in Japan at a ryokan.

Would you be interested in staying at a ryokan? If you are a vegan, vegetarian or have any dietary restrictions, you have to explain what you request very carefully so that the ryokan can really understand what you do not eat. But, unfortunately, there are not many ryokans that have English speaking employees.

Another problem is that some ryokans cannot offer vegan / vegetarian meals because, as you may know, dashi – soup stock mostly made from fish – is so important in the traditional Japanese cuisine.

For these reasons, it is recommended that you contact the ryokan before you book.

Following are some expressions that would be useful when you write to ryokans.

I would like to make a reservation but I would like to ask you a question. Would you offer vegan meals? I do not eat any animal products, including fish, egg and dairy products. ==> 部屋の予約をしたいのですが、お聞きしたいことがあります。ヴィーガン向けの料理をお手配いただくことはできますでしょうか？魚や卵や乳製品も含めて、動物性のものは一切食べられません。

I do not eat soup stock if it is from fish or chicken. ==> 出汁についても、魚や鶏からのものでしたら食べられません。

It would be much appreciated if you would let me know if this is possible. ==> ヴィーガン向け料理のお手配の是非について、ご返信いただけますと幸いです。

If the ryokan responds to you in Japanese, you will have to use Google Translate or another similar service. However, machine translation still cannot be 100 % correct.

In addition, Japanese people prefer to say negative things in a very indirect way. This would make it more difficult for you to decipher the response.

To avoid such a problem, I would recommend that you add one (or both) of the following sentences.

We do not speak Japanese, so it would be appreciated if you could answer with simple expressions so that we could understand it by machine translation, or in English. ==> 私たちは日本語が話せませんので、機械翻訳できるよう簡単な表現か、英語でご返信いただけるとありがたく思います。

If you could offer vegan meals, please start your response from “yes”; if not, please start from “no”. ==> もしヴィーガン向けの料理をお手配いただけるようでしたら、ご返信を「はい」から、そうでなければ「いいえ」から始めていただけますでしょうか。

I know it is very complicated to customize these expressions if you are not familiar with Japanese (or even if you have studied Japanese for a few years…). Google Translate would be able to help you but it would be better that you have your email native checked to avoid any misunderstanding.

If you are not hurry, you can leave a comment here. I will check (or translate) your sentences.

Following is an example email and its literal meaning.

We are vegans and we do not eat any animal products, including fish, egg and dairy products.

I imagine this could be complicated with Japanese dishes but we do not take dishes made with soup stock from fish.

Could you let us know if you would be able to offer any meal without animal products?

We do not speak Japanese, so it would be appreciated if you could answer with simple expressions so that we could understand it by machine translation, or in English.

How to find vegan / vegetarian restaurants in Japan

As most of you must know, HappyCow is an excellent app for vegans and vegetarians and there are a lot of Japanese restaurants registered. Try look for vegan restaurants in Tokyo; you will find plenty of options. There website is here and the app is here. 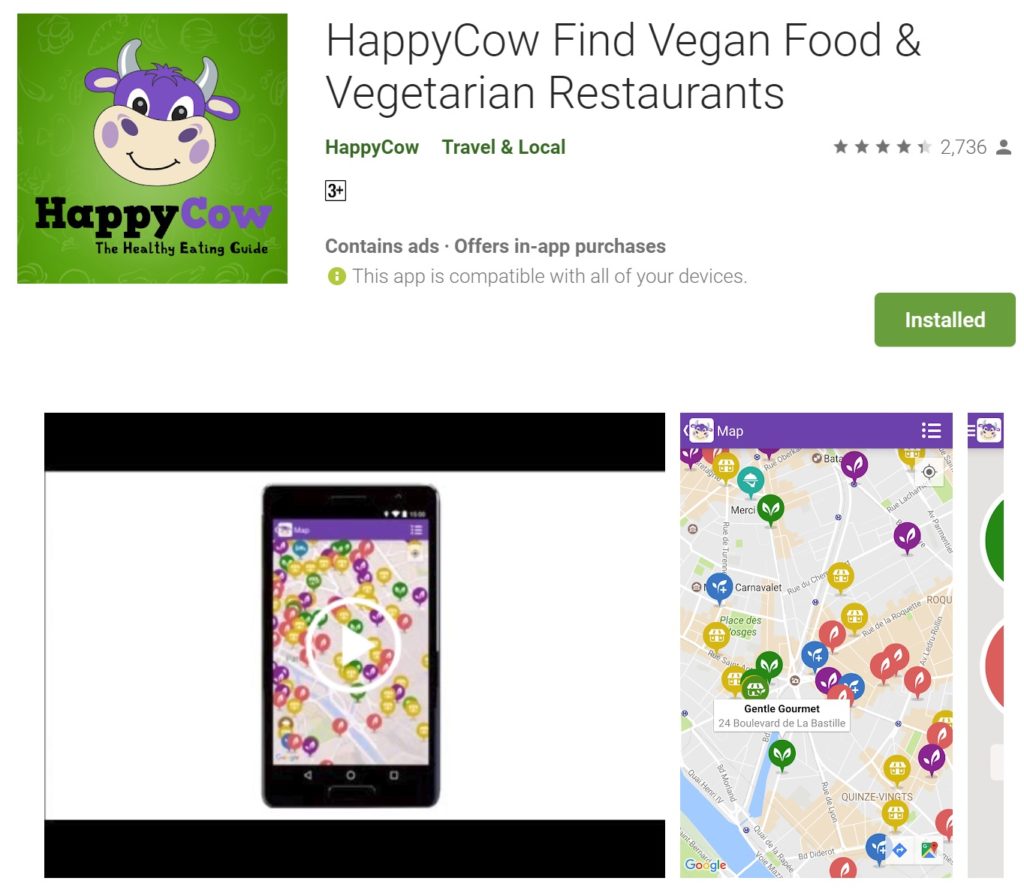 When I travel abroad, I usually download map data of the area into my smartphone using the “offline maps” tool of Google Maps. Then I search for vegan restaurants and shops with HappyCow and mark all look nice as “favorite” in Google Maps. In this way I will never miss the restaurants even if I’m offline.

Searching “vegan restaurants” directly on Google Maps, however, doesn’t work well in Japan. I don’t know why but fast food chains like McDonald’s or KFC are in the search results…

Japan Vegetarian Society is a Japanese NPO that provides much information for vegetarians and vegans. I often refer to their vegetarian restaurant list when I travel. The list isn’t complete and there are some vegetarian / vegan restaurants missing, but most of the restaurants in the list are high in quality.

The list is available only in Japanese but some restaurants have their own website and some of them are available also in English. Another solution is automatic translation by google; if you use Google Chrome, just right-click on the page and select “Translate to English”. 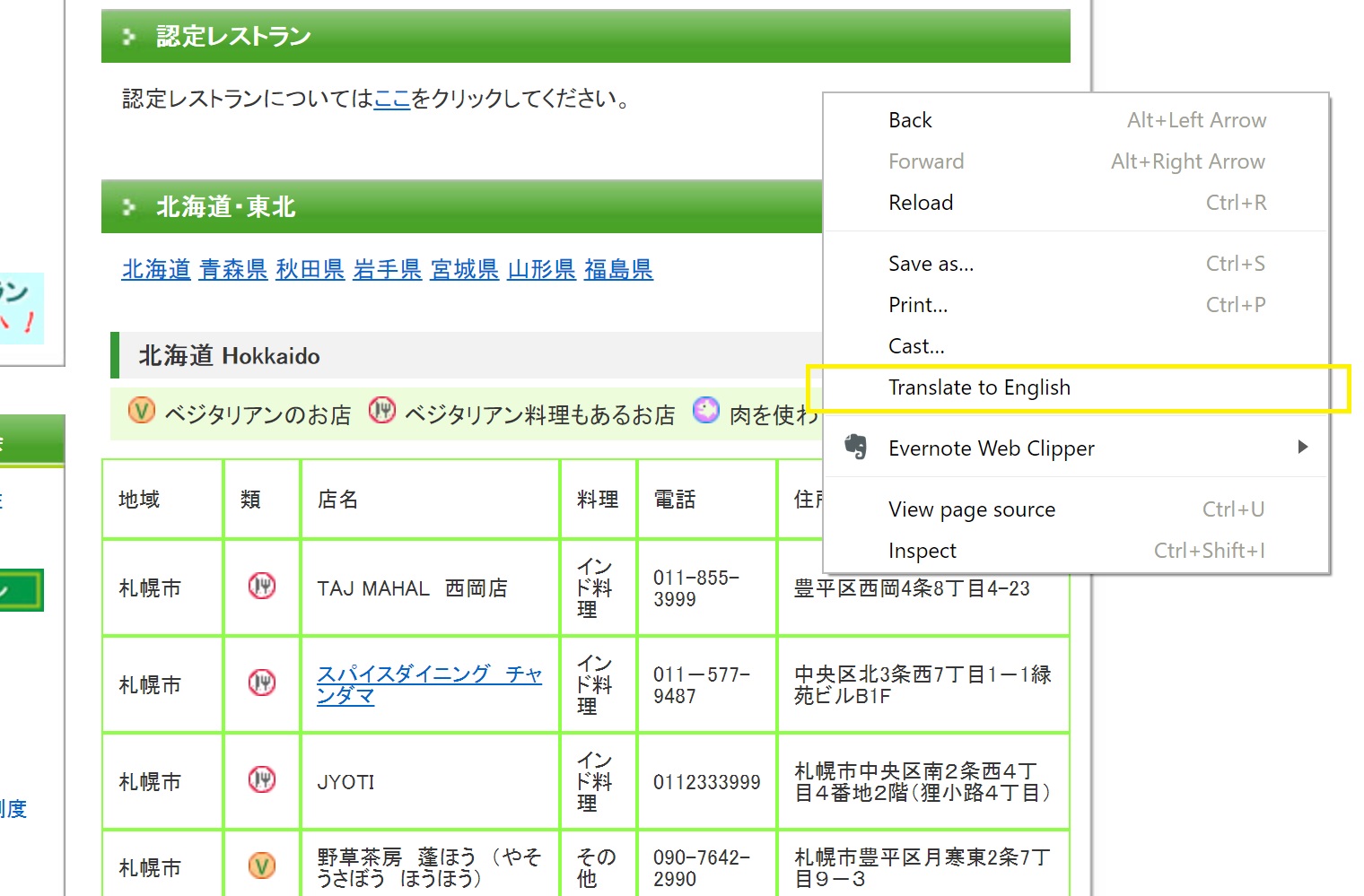 Or you can copy and paste the address into the search bar of Google Maps to see where it is.

These two tools, HappyCow and the website of Japan Vegetarian Society, are practical when you travel in Japan. If you are still wondering if you could come to Japan, just try looking for restaurants around your destinations.

Some expressions to survive as a vegan in Japan 1 (Restaurant)

Are you interested in coming to Japan? Or do you already have a flight ticket?

Travelling or living in Japan as a vegan is not impossible but not very easy either. It is quite difficult to find vegan / vegetarian meals on the menu of ordinary restaurants; I would say more than 90% of Japanese restaurants are not very aware of vegetarianism.

However, some of them would offer some vegan / options if you ask.

The problem is, most Japanese people are terrible at speaking in English, while many of us are rather better in reading. If you cannot make yourself understood in oral communication, try writing down the sentences you are saying; the waitperson might understand you.

He / she still doesn’t understand you? Try following expressions before giving up.

I am a vegetarian. I don’t eat any animal products. ==> 私はベジタリアンです。動物性の食品は一切食べません。

The word vegetarian (ベジタリアン or ヴェジタリアン) is already common in Japan (while there aren’t many vegetarians) but there are not many Japanese that understand what vegan (ビーガン or ヴィーガン) means. To avoid any misunderstanding, it is recommended that you describe yourself as carefully as possible. It is safer that you say “I am a vegetarian” and give details about what you eat and what you don’t eat than you just say “I am a vegan (私はヴィーガンです)” because the waitperson probably doesn’t know what vegan means.

I don’t eat any animal products, including fish, egg, milk and cheese. ==> 動物性の食品は一切食べません。魚や、卵や、ミルクやチーズも食べません。

As I mentioned above, it is safer you are as precise as possible. Many Japanese people think vegetarians eat fish and you will have to clarify that you don’t eat fish. It is better you say “milk and cheese” rather than you say “dairy products” (乳製品) because people sometimes don’t think much about the origin of milk and cheese are the same.

Many people aren’t aware what gelatin is made from; it’s better that you mention you don’t take it. As you may know, fish stock is almost indispensable for traditional Japanese food. Some restaurants can offer dishes made with vegetable stock, but some would just decline you, knowing you don’t take fish stock. It isn’t because they are mean but it’s just because they believe they wouldn’t be able to serve the best dishes they could normally serve without fish stock. In this case, let’s forget about the restaurant and find another one. Chicken extract and pork extract (ポークエキス) are also often used with many dishes.

I hope these expressions would help you to make yourself understood. 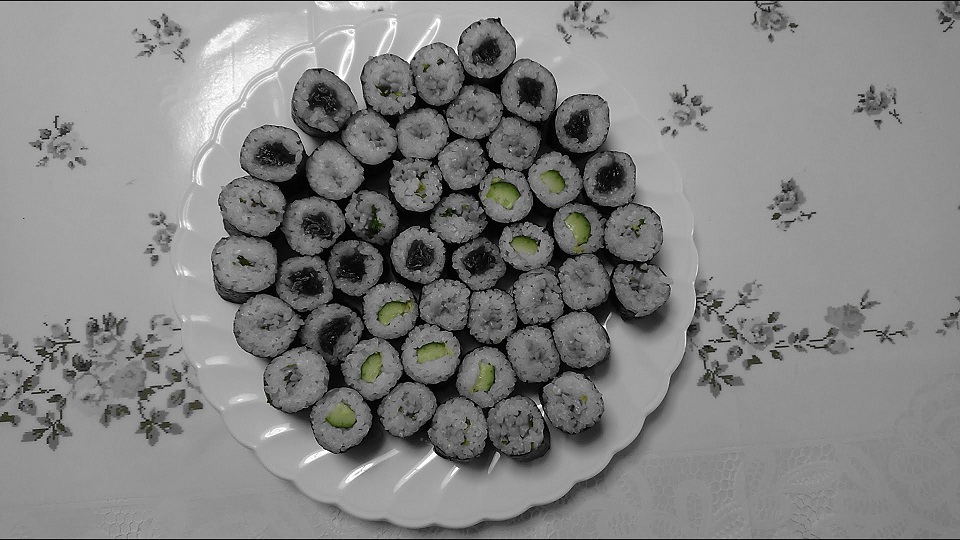